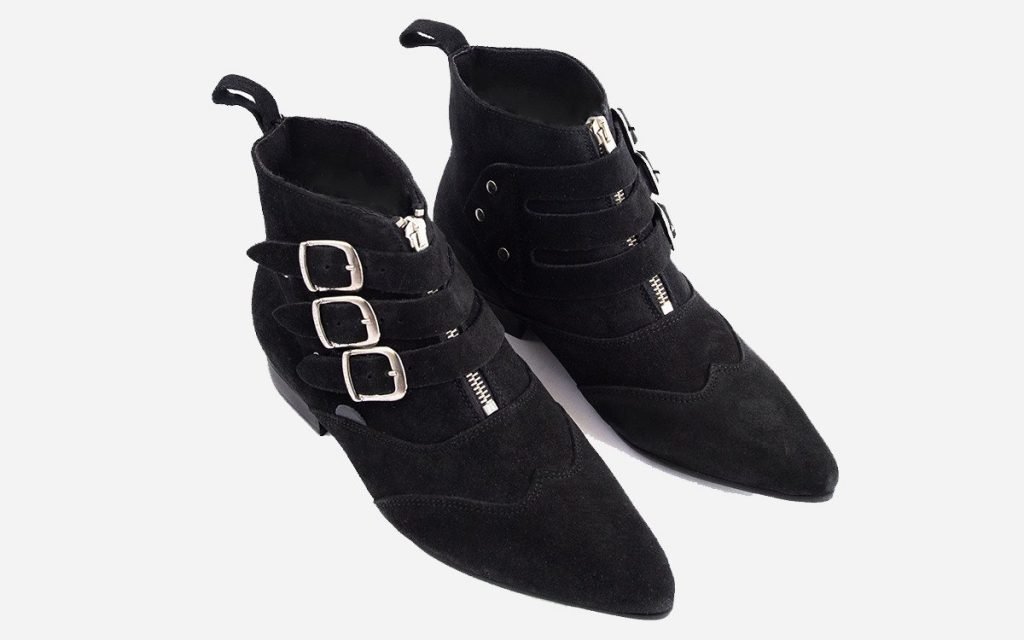 The Winklepicker shoe rose to popularity in the midst of the British Rock and Roll scene during the 50’s. Winklepicker shoes are characterized by their leather construction, pointed toe, and silver buckle on the side (though not all winklepickers have a buckle). (1)

History of the Winklepicker Shoe

Winklepicker shoes are not the first of their kind. This unique style dates back to the crakow shoe, which was a popular fashion statement among nobles (and later the majority) during the 15th century in Europe. The crakow shoe featured an unnecessarily long toe that stretched upwards of 20 inches.

When winklepickers first emerged, they muted the exaggerated toe popularized by crakow shoes, and instead, the winklepicker toe only stretched up to four inches. Today, winklepickers maintain the pointed toe but to a reasonable length of no more than an inch.

How the Winklepicker Got its Name

The unusual name of the shoe has an unusual backstory. In the UK, periwinkle snails, or winkles as they are commonly called, are a treasured delicacy around coastal towns. In order to eat the snails, a sharp, pointed pin is required to pull the winkles out. This unusual method of snacking paired well with the unusual shoe style, and so the name stuck.

This contemporary pointed toe shoe style has morphed to serve both men and women over the years. Here are the different styles of winklepicker shoes.

Men’s winklepicker shoes can also be found in an oxford shoe style. The shoe will usually have a heel of ¼ to ⅛ an inch, and they will either have a slip-on or lace-up front. Winklepicker shoes don’t typically feature buckles or zippers as they are reserved for professional dress. This is a stark contrast from the winklepicker boots that are usually worn with vintage leather jackets, white shirts, and black skinny leg jeans, a similar dress style that accompanied the brothel creepers. (2)

Winklepickers are almost always constructed out of leather. Usually, they are made with one piece of leather that wraps around the front of the shoe. However, the leather may occasionally be interrupted by a zipper, a buckle in boots, or laces in the oxford style winklepickers.

Winklepickers first originated with an exaggerated pointed toe that would, at times, reach up to four inches in length. It wasn’t long before the exaggerated toe was shortened to a more practical “chiseled toe”. This transformation allowed both men and women to wear the shoes.

The heel of a winklepicker is muted and rarely exceeds an inch in male shoes. Though in the female variations, the heel does vary between a half an inch with stilettos ranging from two to five inches. The heel and overall base in the men’s winklepicker is a stark contrast from the brothel creepers that also dominated the 50s. Though sometimes, you will find men’s winklepicker low cut boots featuring a Cuban heel.

British rock and roll bands helped propel the popularity of winklepickers. They were wildly popular with musicians, including the following bands and artists:

The rock band The Horrors at one point even sold their official merchandise that promoted the three buckled winklepicker boot. Musical vocalist and illustrator for The Horror’s merch, Faris Badwan is known for his admiration of the shoes as he personally endorsed the elegant Paolo Vandini Veers. The Paolo Vandini Veers have remained a staple of the modern winklepicker shoe as they continue to be donned by the likes of popular British entertainers, including Russel Brand, Alex Zane, and Noel Fielding.