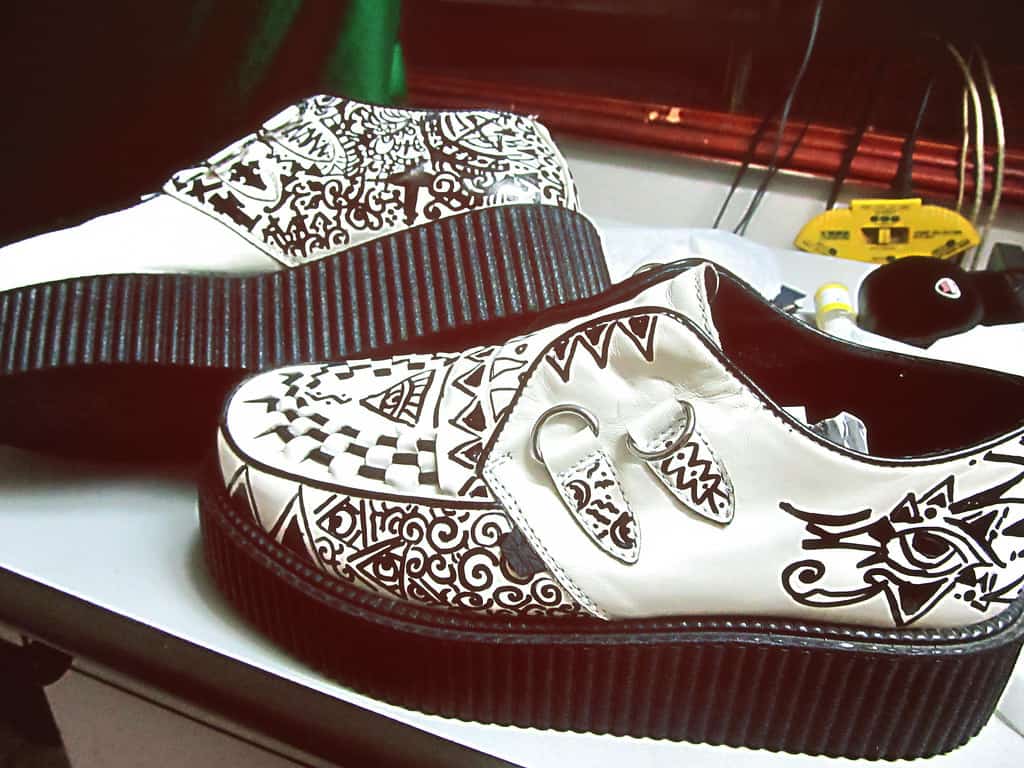 Brothel creepers, or simply creepers, are soft shoes featuring thick crepe soles and suede bodies. Along with a wide platform heel, most creepers have a round toe and lace-up closure.

Created in the late 1940s, brothel creepers have remained a fashion mainstay for more than half a century (1). The shoes originated with returning World War II soldiers, who fitted their suede desert boots with rubber soles before venturing out to parties and clubs in London. (A few may have stopped off at their local brothels, as well. However, historians believe the name stemmed either from Ken Mackintosh’s hit song and dance, “The Creep,” or a misspelling of the crepe featured in the shoes’ soles.)

Eventually, period manufacturers took notice of the growing trend and started making their own creepers to meet popular demand. In 1949, George Hamilton Cox designed and sold a type of creeper called the Hamilton. The shoe quickly became the preferred footwear of a certain subsection of British youth known as the Teddy Boys.

Members of the working class, the Teddy Boys donned their brothel creepers with Edwardian-style attire, including drainpipe pants, button-down shirts, jackets, and exposed socks (2). The idea was to emulate the dandies of the early 20th century.

Where to Spot the Style

Brothel creepers lost some of their popularity during the 1960s. However, the punk crowds of the 70s soon rediscovered this versatile footwear. Rockers gleefully adopted the creeper, wearing it with leather jackets and t-shirts. Today, creepers remain a grunge fashion favorite, showing up on celebrity feet and runways around the world.

One of the appeals of the brothel creeper is its adaptability. Traditional brothel creepers had suede bodies, but today the shoe is available in leather, velvet, and fur varieties, as well. Though black is the most popular color, you can also find these shoes in purple, white, brown, and even leopard prints.

The footwear finds favor with a wide range of groups, including the punk, ska, goth, and glam communities. Moreover, top designers reinterpret the shoe regularly, with recent versions ranging from sweetly feminine Chanel offerings (3) to athletic Puma looks (4). When it comes to brothel creepers, the options are seemingly endless.

What Shoes Did The Weeknd Wear in the Super Bowl?

That’s right! At the Super Bowl LV halftime show, The Weeknd wore black and white “creepers” shoes. While many news outlets simply referred to them as “oxfords” or “derbies,” our shoe-savvy ShoeIQ readers will recognize these shoes more precisely as creepers due to their distinctive thick platform soles.

Where to Find Them

Brothel creepers are available for purchase at a wide array of online retailers, including Dr. Martens and T.U.K. Shoes Outlet. Additionally, you can find creepers for sale at a handful of brick-and-mortar shoe sellers. Prices range from around $60 to over $200 a pair.