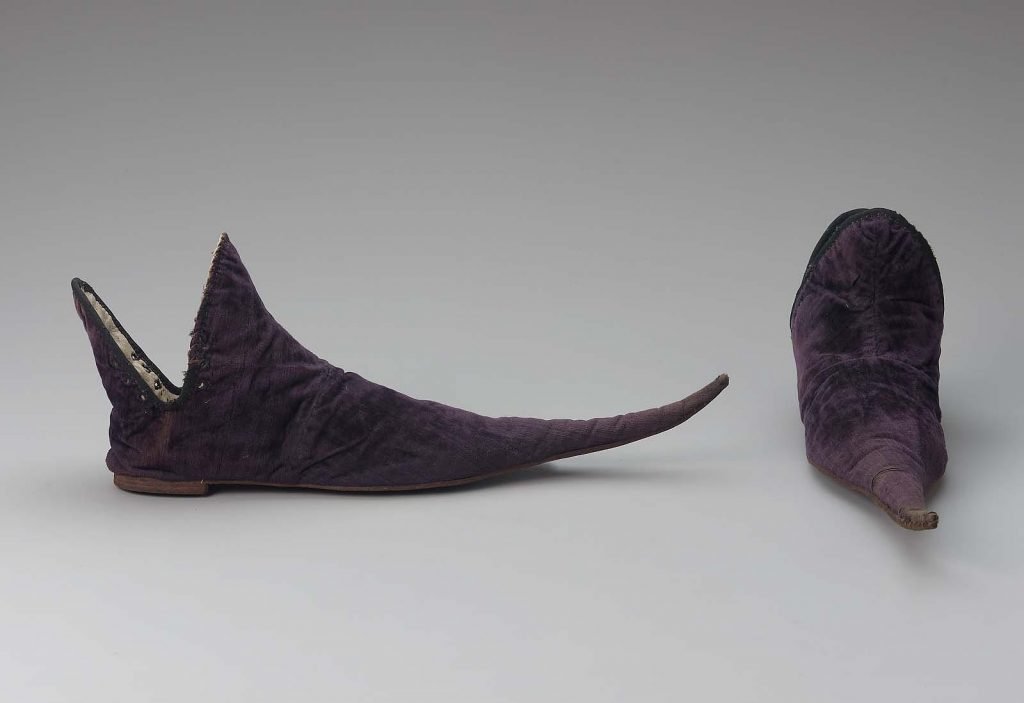 A crakow shoe is a type of shoe that has an unnaturally elongated and pointed toe. These shoes gained popularity in the 15th century in Europe though some reports date them back to the early 1300s. (1)

Crakow shoes get their name from the city Krakow, Poland, where the shoes are thought to have originated. Sometimes you’ll hear them referred to as poulaines as well (referring to their Polish origin).

Crakow shoes have a peculiar and often silly look as the toe of the shoe was known to extend anywhere from a couple of inches to over twenty inches in length. Because of who wore them, crakow shoes gained a reputation of being the shoe reserved for nobility and those who could afford a luxurious, relaxed lifestyle.

The pointed portion of the shoe is what’s referred to as the poulaine by some historians. Some people use the term poulaine to refer to the tip, while others use the terms poulaine and crakow interchangeably. (2)

Polish nobles set the standard for these shoes to be the footwear for the upper class, and it wasn’t long before the fashion trend was imitated by the common folk.

The elongated, awkward toes of crakow shoes were also a sort of status symbol. Those who wore them made an unintended social statement that they had the freedom and luxury to enjoy life and not work.

The shoes were also worn indoors and during outdoor social events. They were never worn for battle as they didn’t provide a reasonable amount of support or steadiness.

The fashion trend was popular amongst men in the 14th century, and it wasn’t until the 15th century that women began wearing them as well. Generally, the tip of a men’s crakow shoe was much more elongated than a women’s. (3)

What Were Crakow Shoes Made of?

There were a variety of materials used to make crakow shoes. Typically, you would find them made out of leather. Sometimes the elongated toe was so exaggerated that gold or silver chains were attached just under the wearer’s knee to help keep the shoe’s toes upright.

Sometimes, the shoes would be supported by “patterns.” Patterns were a sort of shoe cover made of cork or leather that provided additional strength to the crakow shoe.

Because the toes of some crakow shoes could get very long and flimsy, they were often stuffed with moss to help keep their shape as well.

The exaggerated point of a crakow shoe is the highlighting feature with some shoes having points that stretched anywhere from four to twenty inches. Typically, you could find two types of crakow shoes.

One style was a slip on crakow that did not need to be worn with additional buckles or straps to stay on the feet. The toe lengths were not overly exaggerated, and they could keep their hold.

As the popularity of the poulaines grew, so did the disdain amongst royalty. This was because the minority was mimicking the shoe that once held noble standards. This led to sumptuary laws being introduced.

In 1368 Charles V of France passed an edict banning the production and use of crakow shoes. Charles V cited that the extravagant length of the poulaine made it difficult for men to kneel in prayer. Edward IV followed suit in 1463 by passing sumptuary laws that limited the length of a pouplin to 2 inches. (4)

The Evolution of the Winklepicker

Though the outrageous trend sizzled out after the 15th century, crakow shoes have found a way to live on. They’re credited as the inspiration behind the birth or the winklepicker shoe. Winklepickers made their debut in the 1950s during the British rock and roll scene.

Much like a crakow, winklepicker shoes have a distinctly pointy toe, though the toe doesn’t reach more than two inches in length. Winklepicker shoes get their name from the popular snack, periwinkle snails, a delicacy that requires a sharp pin to enjoy.

Much like crakow and winklepicker shoes, other pointy toed shoes around the world, have gotten their names from silly references, mainly because of the shoe’s undeniably silly look. (5)