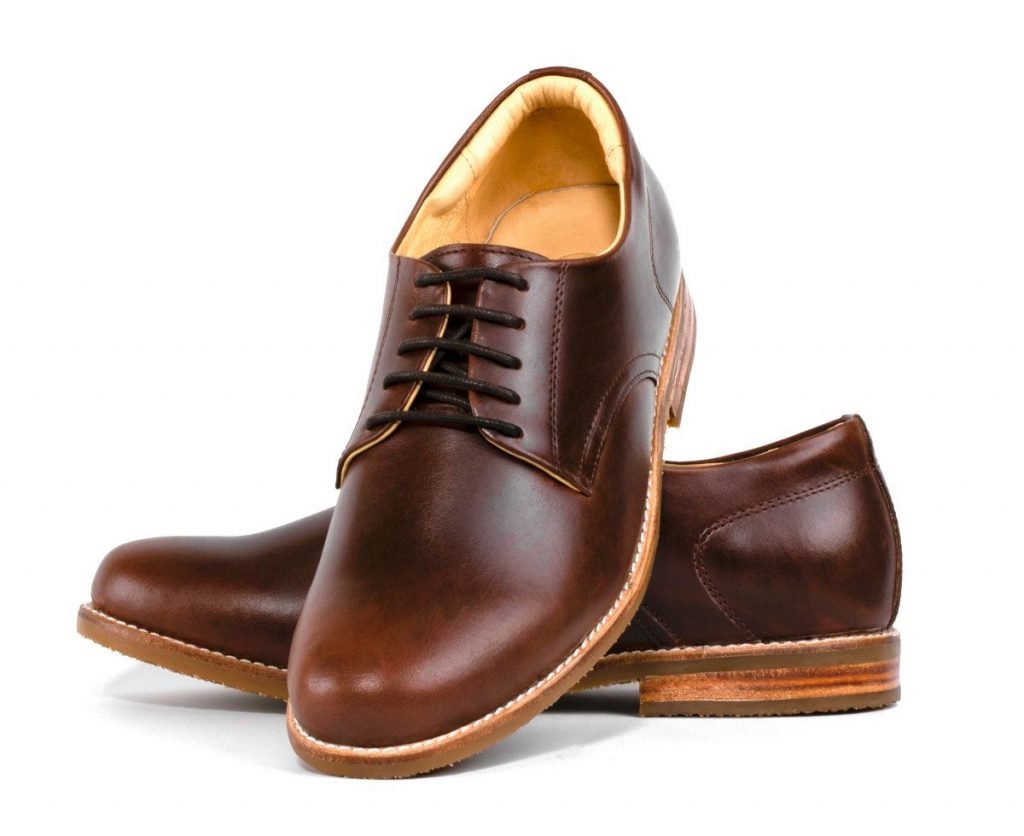 You may have heard of the derby hat, but have you heard of the derby shoe? Both clothing articles are worn by men who want to look a bit on the dapper side without being too super formal. Also known as the Gibson, this style of shoe is distinguished by quarters with the shoelace eyelets being sewn on top of the vamp. These shoes are often known colloquially as “bucks” as the upper is often made of buckskin.

Some theorize that a few of the boys from Oxford just wanted something with a little more room in the instep. Some would like to credit one Edward Smith-Stanley, the 14th Earl of Derby. (This would explain the name.)  It seems His Lordship had rather big feet. You know what they say about men with big feet. Yes, they need big shoes!

His bootmaker created something with an open-laced construction to accommodate. Of course, some people want to credit his grandfather, after whom the horse race is named. People who prefer to call these shoes bluchers might credit a Prussian army officer named Gebhard Leberecht von Blücher.

The General wanted something that could be easily put on and easily taken off and could stand a long march in the mud. These are the shoes Blücher and his men wore to fight against Napoleon at Waterloo. (Incidentally, when referring to the shoe, we will do without the umlaut and use the lower case B.)

The plain derby, as the name suggests, is a pretty straightforward shoe. They may not look fancy, but they work very well with a formal or at least semi-formal suit. The cap toe derby will have toes a slightly different color than the rest of the leather. The wingtip derby has a more pointed toe cap shaped like a U or an M or a W. It will also feature a heel cap and generally some fancy stitching and broguing.

How to Wear Derby Shoes

A derby shoe is a good middle-of-the-road shoe that is neither very formal nor too casual. The plain derby goes with just about anything. Smart casual suits can work with derby shoes, but they go great with sport coats and chinos.

The cap toe derby tends to be very casual but can look almost as good as an oxford if polished well. Still, it is better suited for casual outfits than suits. You can even wear them with denim.

The apron, mock toe, and bicycle derbys are likewise casual. The wingtip is traditionally very casual and, in my opinion, very old-fashioned. It probably shouldn’t be worn outside a performance of Guys and Dolls.

One way to get a fresh look out of your derbys is to switch up the laces. Light and vivid colors work in the summer with a nice seersucker. Neutrals and dark colors work better when you want a more sophisticated look.

If you have brown shoes, they will traditionally be seen as rather casual. Granted, this rule about “no brown in town or after sundown” has become more relaxed of late. It’s going the way of “White only between Memorial Day and Labor Day.” Still, it is a good idea to color coordinate.

Are they light brown or dark brown? That will affect what sort of colors looks the best with them. Dark brown goes well with charcoal grey. Light brown shoes go with lighter colors and are seen as more casual. Of course, no well-dressed gentleman would forget the matching belt!

Difference between Oxfords and Derbys

This closed system is generally considered more formal. This makes the derby the less formal of the two, and it puts the derby in that difficult clothing category of semi-casual, also known as smart casual. Chocolate brown or russet-colored derbys are the most versatile.

Another big difference between the two different kinds of shoes is the toe. The toe of the oxford tends to be somewhat elongated. Some derbys may be on the elongated side but are just as likely to be rounded. Both feature a stitched leather sole and three-part paneled construction. The oxford is nearly always made out of stiff leather. The casual derby, however, can be made out of the more flexible suede.

Difference between Bluchers and Derbys

Derbys and bluchers are so similar, they are nearly synonymous in American English. Both have open lacing construction. The real difference is that the blucher has the vamp in one piece. The derby has two quarters that have been sewn together plus a vamp with a tongue. The blucher has small bits of leather sewn into the vamp, thereby creating the lacing system.

Bluchers are more comfortable and easier to take off and on, so they are somewhat more casual than derby shoes. The blucher is a sporting shoe but goes well with tailored clothing. It has little other difference with the derby.

Some people think men’s fashion doesn’t really have much variety to it. There are, after all, only so many ways to change the silhouette of the common trousers, shirt, and jacket combo. However, you can change up the color combo and the right pair of shoes can make or break the ensemble.

The derby shoe is not at all right for the pool and would be questionable for black tie formal, but they’re pretty much perfect for everything in between. Of course, a good pair of shoes does more for your style than simply looks. In the words of designer Christian Louboutin “Shoes transform your body language and attitude. They lift you physically and emotionally.”