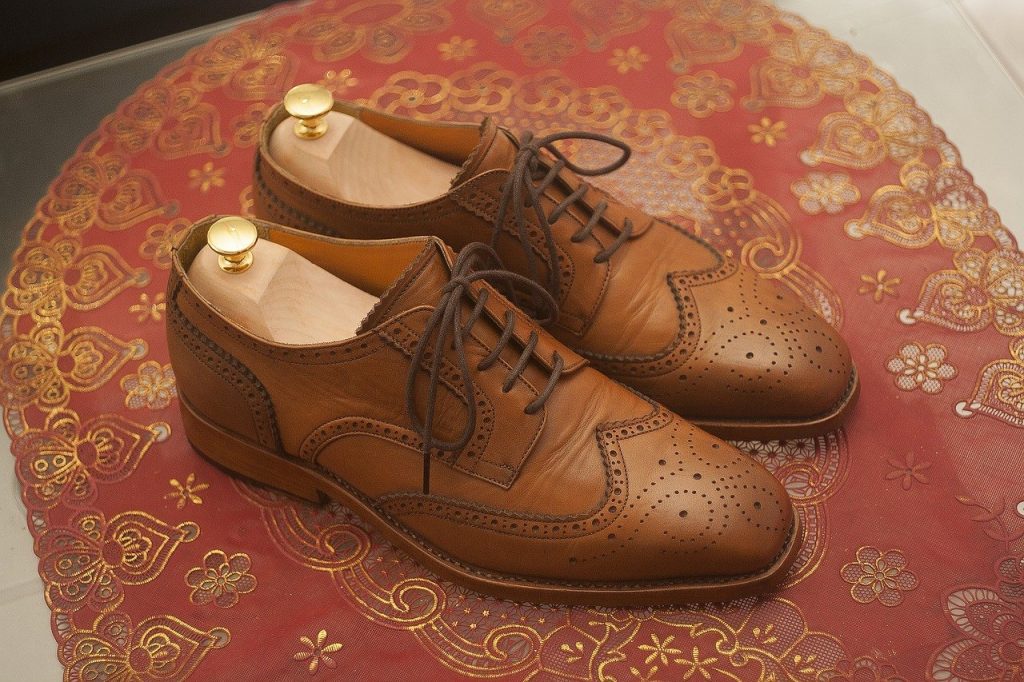 Brogue shoes are a type of men’s shoe characterized by multiple pieces of sturdy leather uppers, a low heel, and their iconic decorative perforations (broguing patterns) that line the edges of the different leather pieces. (1)

The word brogue is derived from the Gaelic word “Brog,” which means leg covering, but it also has Norse roots after the Norse word Brok, also meaning leg covering. This unique shoe style traces its history back to Ireland and Scotland as early as the 16th century.

The men who wore them at the time favored their practicality because the perforations allowed water to drain out of the shoe whenever they came out of wet terrain like a bog. It wasn’t until the start of the 19th century the design of the shoe became popular among farmers and countrymen who worked out on the fields.

Early brogue shoes featured sturdy construction, were often made of a double sole, and had sturdy uppers. As the shoe evolved, so did the way it was perceived by society. The modern-day brogue is now a symbol of character, class, and prestige, and unlike their predecessor, you might not want to drag your brogues through the water. In true authenticity, the brogue shoe has held onto its identity of being an outdoor, country shoe. (2)

What Are Brogue Shoes Made of?

Early brogue shoes were meant to take a beating, so they were crafted out of untanned animal hides. Today, classic brogue shoes are made out of sturdy leather uppers fashioned from several pieces of leather.

The broguing varies from shoe to shoe with intricate perforations on all seams to more simple styles on the wingtip. Some brogue shoes will feature a combination of leather and suede for a contrasting look, but that style was more reserved for festive events and not regular outings.

Early brogue shoes were worn by farmers and outdoor laborers since the broguing allowed for easy drainage of water-soaked shoes, as described above.

But during the 20th century, royalty helped propel brogues into mainstream society. Both the Prince of Wales and Edward viii have been photographed wearing the perforated shoes on outings and while golfing.

Not long after, the shoes made their way into mainstream culture. Brogue shoes became popular among men in the United Kingdom and the United States. Even other shoe styles like Oxfords have adapted elements of broguing.

In the late 20th century, two toned brogues shoes became a popular shoe choice for many in the Jazz scene. This helped add to the intrigue and “coolness” of the shoe.

Today, brogue shoes continue to be a sophisticated fashion choice. They are often worn for leisurely outdoor activities, including golfing and country outings.

Brogues come in varying styles but hold tightly to their perforations. The most common types of brogues you will see nowadays include the following:

Full wingtip brogues feature a full winged top cap, with a generous amount of perforations on all or most seams of the shoe. Typically, the shoe will be a varying shade of brown.

Long winged or American brogues feature wings that extend over the entire shoes, meeting at the seam on the back of the heel.

Half brogues have perforations only on the toe cap.

Quarter brogues have perforations on the toe cap, but the perforations are usually understated, allowing the shoe to be a more formal brogue.

Spectator brogues will have a two-toned color scheme. Sometimes, there will be different types of materials used to achieve the two-toned color. Spectators are usually reserved for festive events.

Brogue boots are also a popular style to go with, especially during the colder months. Brogue boots will have a thicker heel, often made out of rubber and the durable leather uppers retain their classic perforations. (3)

About a decade ago, brogue shoes became extremely popular in women’s fashion with celebs like Sienna Miller and Emma Watson wearing them around. Through celeb influence, women’s brogues took on unconventional colors and materials, but the trend was just that, a trend.

Today, brogues continue to be the shoe of choice (primarily for men) for leisurely activity. While they are not usually worn in the business setting, black leather brogues will sometimes pop into the scene as a sophisticated shoe to wear to the office.

Lately, brogue shoes have held tightly onto their roots as they continue to be the shoe choice for many in the English nobility. Prince Harry has helped keep the shoes in the spotlight as he is known for wearing brogues so often that they’ve taken quite a beating. In a 2018 event, the Prince was spotted wearing his classic brogues that were in need of repair, as indicated by the huge hole on the sole of the shoe.