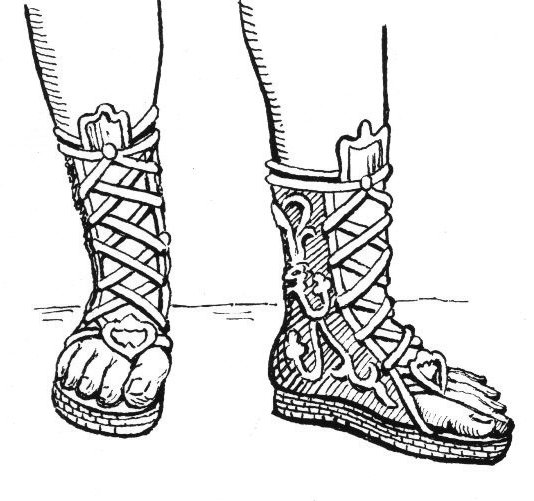 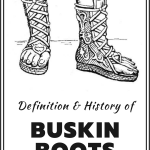 Buskin boots (also call cothurns) were an ancient form of footwear characterized by an open toe with quarters and uppers that gave way to a high shaft or top. With their front lace-up closure, the boots resemble a sort of sandal with an extension. (1)

Buskin boots trace their roots to ancient times as they were worn by soldiers in Ancient Rome and Greece. These unique boots get their name from the French word brousequin, which translates over to “half boot.” It wasn’t until the year 1503 that buskin boots were recorded in the English language.

Buskins generally came up to the calf, but they could extend up to the knee as well. Because of this, they became wildly popular among a range of individuals in ancient societies.

The boot’s long shaft gave soldiers an adequate level of protection during battle, and Spartan soldiers were known for wearing red buskins so that bloodshed from battle blended into the shoe.

Athletes preferred a more durable buskin that allowed them to be comfortable and active. It wasn’t uncommon for athletic buskins to be shorter and padded with fur for extra support.

Hunters also wore the boots as they helped protect against the scratches and scrapes from the environment. (2)

What Are Buskin Boots Made Of?

Buskins were generally made out of durable cloth or soft leather and featured a relatively thick sole that could be up to an inch thick. They had lace-up front closures that would secure the shoe to the foot. The lace-up closure started at the vamp and ran up the shaft of the boot. Often, the lace-up closure exposed the shin while the back of the boot protected the skin.

Who Wore a Buskin Boot?

The boots were a staple of ancient civilizations, including the ancient Greek, Etruscan, and Roman societies.

Buskins were especially popular among Athenians in the theatre scene. The actors would wear buskin boots fitted with a heel so that they could be taller as they performed. This gave them a figurative “step up” against other performers, including comedians.

Members of the Roman Catholic church were known to wear elegant variations of buskin boots known as liturgical buskins. Though not exactly a boot, they were a sort of stocking worn by ceremonial officiants or celebrants. They were usually made of silk and came in a variety of colors, excluding black. Before the shoes became exclusive to only ranking bishops of the church, nearly every priest had a pair of Buskins. (3)