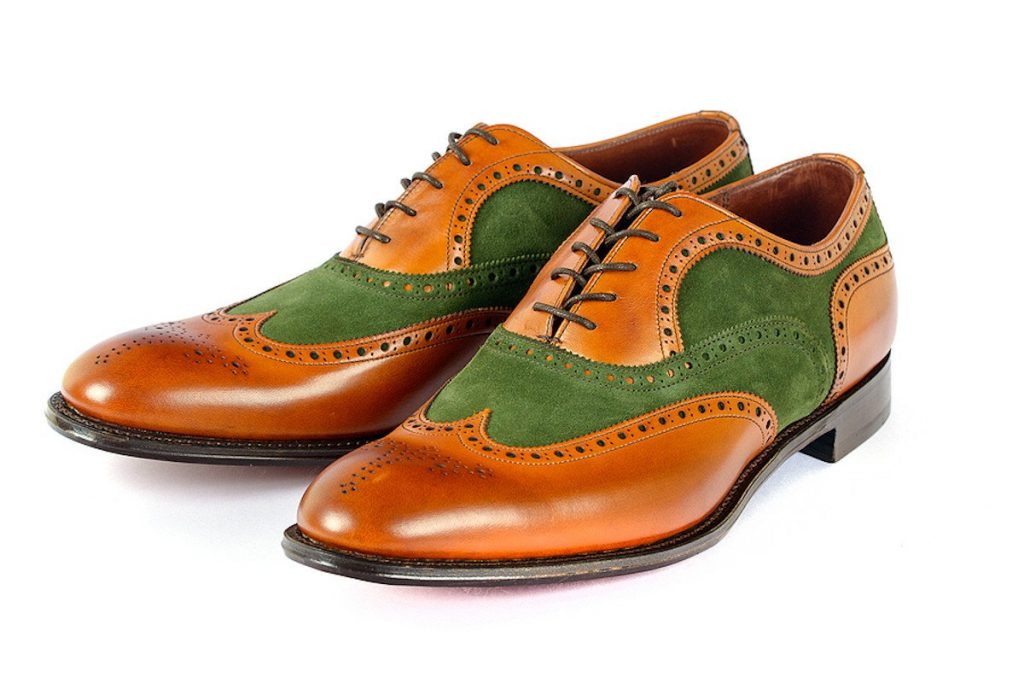 The spectator shoe is a style of low-heeled shoes or Oxford, full brogue, or semi-brogue, designed from two separate colors, normally having the toe, heel cap, and sometimes the lace panels in a darker color than the main body of the shoe.

Spectator shoes date back to the nineteenth century (1) but gained overwhelming attention in the 1920s and 1930s.

Historians seem to agree that John Lobb, a famous English shoemaker, initially designed (2) the spectator shoe as a cricket shoe in 1868.

The spectator shoes are typically made entirely of leather, with common color combinations featuring black, brown, or tan.

Before and during the first world war, it was common among men to wear spats, short for spattering guards, which were a classic footwear accessory for outdoor attire.

The shoes were both stylish and practical. Servicemen wore spats over the cuff of the shoe to accent the shoe’s color and match the suit, while also protecting the wearer’s calves and ankles from dust and dirt kicked up while walking.

Eventually, spats began to go out of style, and the spectator shoe came on the scene to replace them.

The term “spectator” stems from outdoor sporting gentlemen (3) in the early 1900s. Men commonly wore this two-toned style of shoe for golf and cricket. Over time, the shoe became popular with event spectators and the name was adopted.

In the 1920s and 1930s, the spectator was widely considered too flashy for gentlemen and earned the title of “tasteless style.” They became associated with indecent men, specifically “lounge lizards” and “cads,” or more commonly referred to as swindlers and adulterers.

Spectator shoes are also referred to as co-respondent shoes. According to English law in the early 1900s, a “co-respondent” referred to someone charged with misconduct related to adultery.

However, as time went on, spectator shoes caught the attention of just about everyone. From swing and jazz musicians to gangsters, Ivy League students, and the famous Fred Astaire, spectator shoes were suddenly a stylish form of footwear.

In simple terms, spectator shoes are shoes that feature two contrasting colors. Whether it’s an Oxford, Loafer, or Derby, the primary feature are its two distinct tones.

While the majority of spectators are wingtip Oxfords designed in either white/brown or white/black, the style largely depends on the time of year. For instance, in the summertime, men often wore spectators that featured white.

The wing tip or toe cap of the spectator shoe is an intrinsic feature of the shoe and comes in various shapes including wing and short wing, U and V tips, diamond, and moccasin toe box.

Since spectators were so popular in the warm seasons, perforated or woven leather uppers were designed to create breathability.

In the 30s, dance marathons also promoted spectator shoes, which added support to the feet.

Prince Edward, Duke of Windsor, was a major trendsetter in the male fashion industry. He was often seen sporting a pair of Oxfords while playing golf and participating in other events and activities.

Some even speculate the shoes earned the nickname “co-respondent” due to the scandalous relationship between the Prince and Wallis Simpson, who later became Duchess of Windsor.

As the various styles of the spectator shoe grew, so did its presence in general fashion among men and women.

By the 1930s, spectators caught the attention of Hollywood actors and actresses, as well as major footwear companies. Stacy Adams created some of their own custom spectators, including the “Dayton Spectator” shoe.

In regards to how to wear spectator shoes, most men and women wore them during the spring and summer months.

Over the past few decades, spectator shoes have been sported by many film stars, celebrities, and fashion icons. They’ve become a vintage staple among both the young and the old.

In Vikram Seth’s television adaptation, “A Suitable Boy”, Haresh Khanna plays the manager of a shoe factory while sporting spectators.

In the 2013 remake of Great Gatsby (set in 1920s New York), Jay Gatsby (played by Leonardo DiCaprio), alongside many other male characters, are often seen wearing spectators.

In 2016, Damien Chazelle’s film, “La La Land”, became one of the great milestones of the 2010s. Not only is it loved for its modern twist on the classic song-and-dance musicals, but also shines through with its classic fashion.

The characters show off a similar style to that of the jazz age, which viewers can particularly see in the shoes. Actor Ryan Gosling, who plays Sebastian, sings and dances in spectators through the movie, adding a vintage touch that attracts the audience.