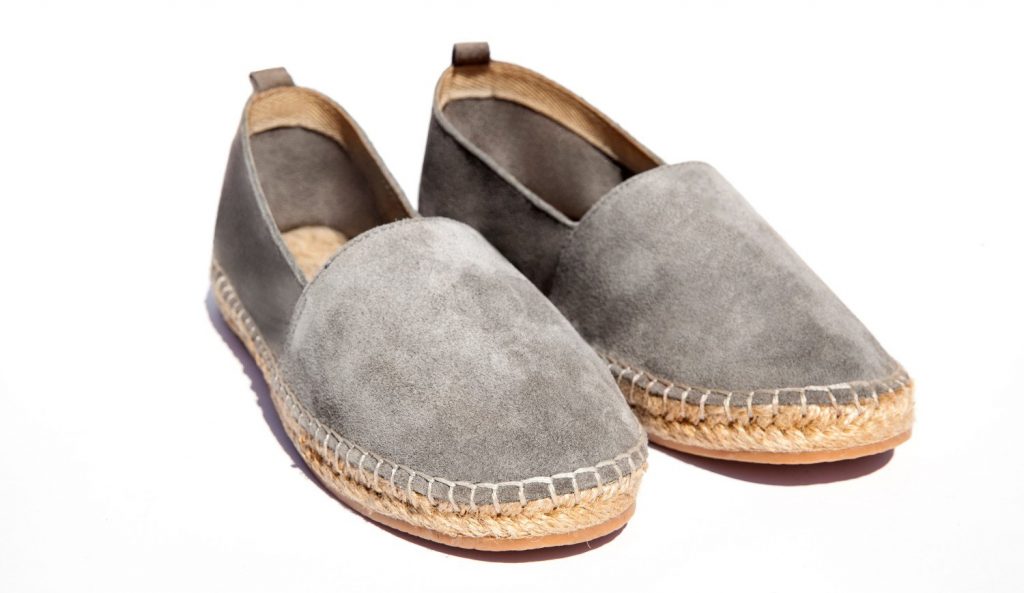 Espadrilles are a type of casual, environmentally-friendly footwear typically characterized by a cotton or canvas upper with a flexible rope sole that’s flat yet firm. The sole is commonly made out of jute or fiber rope. (1)

Espadrilles were originally thought of as “peasant footwear” because of their natural material and simple construction. They’re still considered a very casual style since they slip on without laces. That casual look combined with the breathability of materials make espadrilles a popular summertime footwear choice.

The shoes trace their roots back to Spain in the regions of Catalonia and the Basque County. Throughout history, there has also been sporadic dominance of the shoe in France. Espadrilles take their name from the Esparto grass, which is an indigenous plant native to the south of Spain. This is the same plant that is used in basketry and rope making.

The first espadrilles appeared in written history in the early 14th century, in the Occitania and Catalonia regions along the Spanish and French borders. (2) The term espadrille is derived from the Spanish word espardenya (or esparteña), though the term espadrille itself is a French word. The shoes are named in reference to the material used to make them, jute.

Jute is an incredibly durable vegetable fiber that’s native to the south of Spain, Bangladesh, and India. Not surprisingly, those are now the locations where espadrilles are predominantly produced, given the abundance the defining material. Along with its extreme durability, jute is eco-friendly and leaves behind a minimal carbon footprint. Currently, 90% of the world’s jute comes from Bangladesh. (3)

During the Spanish Civil War (1936 – 39), Spain’s government nationalized the Castañer factory, one of the original producers of early espadrilles, to make shoes for its Republican soldiers. This was because espadrilles were easier and far more affordable to make than leather boots. Plus, the jute material using for espadrilles had a durability that offered protection from cold, humidity, and heat.

After the Spanish Civil War, Castañer rose to popularity and is credited with opening the door for the transition of espadrilles into the modern footwear era. In 1970, Castañer owners Isabel Sauras and her husband, Lorenzo Castañer, were approached by a young Yves Saint Laurent, who helped morph the espadrille wedge style into a fashion staple that would live on for years. (4)

Over the years, the shoes have not changed much as they continue to be embraced by eco-conscious and artisan individuals who value handcrafted, humble style.

Today, you will find many different styles and colors of espadrilles, and nearly every style maintains the traditional jute sole construction and canvas upper. While the original espadrille were slip-ons and did not feature laces or buckles, espadrilles have evolved to include everything from a heel to a strap. Here are some of the most common styles of espadrille you will find.

An espadrille, in its most traditional construction, features a flat bottom sole with uppers that are composed of two pieces. The first piece covers the toe and vamp of the shoe while the second wraps around the quarter, side vamp, and heel of the shoe. These two pieces are stitched together to create a cozy enclosure that snuggles the foot nicely. No lacing, buckle, or straps are ever used to secure the shoe. Instead, they are designed to slip on and off as needed.

Espadrilles with Straps and Buckles

Yves Saint Laurent was one of the first to add a wedge to espadrilles giving them a more sophisticated look. The wedge heel is typically no more than an inch or two and the bottom of the wedge often has a sliver of rubber for a better grip when walking.

Some wedge espadrilles offer an open toe design, but most wedges maintain the traditional concealed upper. Wedge espadrilles also usually have a strap of some sort for additional support. The strap will either be around the shoe’s heel to secure it to the foot, or a ribbon strap that wraps around the ankle then gets tied into place. The wedge support makes walking in them a lot easier than walking in high heels.

These minimalistic shoes were not gender-specific in their traditional design. But as the shoes grew in popularity during the 21 century, more styles have emerged for women than men.

Men’s espadrilles, for the most part, have held onto the traditional design. Men’s espadrilles do not feature buckles, straps, or heels. Rather, they maintain the two-piece construction on the uppers as well as the flat, jute sole. Sometimes you’ll find that the material used for the upper is tougher than that of a woman’s espadrille.

Women’s espadrilles come in all sorts of variations. Whether it’s a wedge espadrille or an espadrille with buckles and straps, there are various color options, upper materials, and styles to choose from. The wonderful thing about espadrilles for women is that they maintain their original humble simplicity as they continue to evolve.

Some brands have been more successful than others in putting espadrilles back on the map. Popular brand Tom’s Shoes helped resurrect the shoes onto the national stage with shoes that closely resembled the espadrille design (Though their shoes weren’t always constructed with the same material). Tom’s mimicked the espadrille theme of humble simplicity as the company was committed to donating a pair of shoes for every pair sold.

As the fashion trend of boho chic and eco-friendly footwear trickled into the scene following the rise of fast fashion, celebrities in every industry helped popularize espadrilles as the footwear of choice for casual summer wear. Even as the season’s change, espadrilles continue to come back year after year during the warmer months as the shoe of choice for comfort, quality, and eco-consciousness. Independent artisans have also helped keep espadrilles alive as the demand for handcrafted goods continues to rise in the fashion scene.