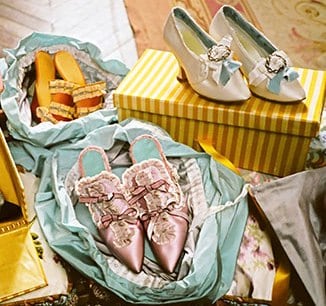 In my first entry for ShoeIQ, I teased you with the promise of discussing the significance of Marie Antoinette’s shoe – today I deliver on that promise, with still a couple of weeks to spare in advance of the U.S. release of ‘Marie Antoinette.’ By now, I’m sure all Manolo lovers will know that Mr. Blahnik is responsible for designing the majority of the shoes for the title role so I won’t bore you with a recap of what you may expect from that end. I would like to mention one interesting bit of trivia, however – as Clare Coulson discovered in her interview with the designer, Manolo Blahnik sought out the collection of 18th century shoes of the V&A in London, as well select pieces in Paris. You might ask yourself, why should Manolo have to travel to London to study the art of 18th century French footwear? As the most notorious queen in French history (if not the history of the world), shouldn’t Marie Antoinette’s enormous collection of footwear be housed in one of Paris’s own excellent museums?

The answer is quite simply this: very little remains of the actual wardrobe of the ci-devant queen (roughly translating as the erstwhile queen, this term was applied to both king and queen). What is significant about Marie Antoinette’s shoe, held in the collection of the Musée Carnavalet in Paris, is that it is bereft of its mate, one of the only remaining emblems of this “Queen of Fashion” (and yes, I borrow this title from Caroline Weber’s recent work of the same name) and though relatively simple in design, is wrought with historical and sartorial significance.

Its story is just this – after a failed attempt to escape the clutches of French Revolutionaries in 1791, the Queen and her family found themselves again inside the walls of the Tuileries. The King’s divine authority had been overturned and though he continued to play a role in government, it was severely limited. Daily, the royal family feared for their lives – expecting death to come via poison, bullet or dagger. By early August of 1792, Marie had resigned herself to her fate, reflecting that, “a queen who is not regent must, in such circumstances, remain inactive and prepare to die.” This resignation seems extremely out of character for the queen, seen through the eyes of the contemporary student of French history. Was not Marie the one who donned a man’s riding habit as dauphine in order to exert her power and authority over the court of Versailles? Did not Marie eschew fashion’s standards and embrace the chemise à la créole or gaulle, a muslin confection that showed a brazen rejection of the French court’s entrenched set of sumptuary restrictions? And yet, following the failure of the family’s escape to the Austrian border – a scheme largely organized and orchestrated by Marie – the once strong-willed and resilient queen was defeated and drowning in her own futility.

The family’s worst fears were realized on August 10 – driven to violence by a royalist manifesto threatening swift and violent retribution to the French populace should any harm come to the unseated royals, “all of Paris” marched on the chateau of the Tuileries. With only a handful of Swiss guards to protect them, who were swiftly overcome by the hordes of sans-culottes, the royal family was forced to flee with only the clothes on their backs. As they fled, in a kind of sad parody of the Cinderella tale, the Queen lost her shoe – a satin slipper with ruched ribbon trim. This solitary shoe was salvaged and is now housed in the collections of the museum of French history, the Musée Carnavalet – the majority of the queen’s wardrobe which was not looted in the riots which followed, was later dispersed through public auction, scattering the evidence of the queen of luxury’s indulgences to the four winds (Even under house arrest in the Tuileries, Marie still maintained a line of credit with her marchande des modes, Rose Bertin). The shoe was last exhibited at the museum in an exhibition entitled: “La Famille Royale: de l’histoire à la legende” (1993-94).