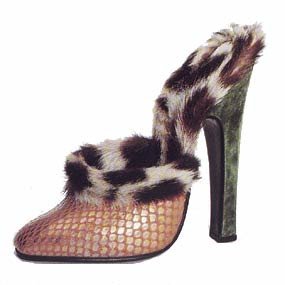 While in Toronto a few weeks ago, a visit to the Bata Shoe Museum reminded me of another of my favorite early 20th century designers – André Perugia. One of several featured designers in the museum’s Icons of Elegance exhibition, Perugia designed shoes for some of the world’s most affluent women – women like Ganna Walska, whose turbulent marital relations provided character inspiration for Orson Welles in the writing of Citizen Kane.

And like his contemporaries, Elsa Schiaparelli and Coco Chanel, André Perugia looked to modern art for inspiration. But it is not his work for Ganna or his shoes that echoed the paintings of Picasso and Braque that drew my attention most. It was a pair of fur-lined mules made for the Parisian chanteuse, Mistinguett.

The Mystique of Mistinguett

Jeanne Bourgeois first appeared as Mistinguett at the Casino de Paris in 1895. She later appeared in shows at the Folies Bergere, the Moulin Rouge, and Eldorado. Her risqué routines and provocative costumes captivated Paris throughout the first decades of the 20th century. In fact, Mistinguett went on to become the most popular French entertainer of her time as well as the highest-paid female entertainer in the world. And in 1919, her legs were insured for the then astounding amount of 500,000 francs.

The slippers on display at the Bata, created in 1948, were designed to make the most of those priceless legs. Adopting the aims of a fetish shoe, Perugia designed this pair to further elongate Mistinguett’s treasured leg.

Fetish and fashion have long gone hand in hand, as documented by costume historian and curator, Valerie Steele in her work Fetish: Fashion, Sex & Power.  Fashion designers such as Gaultier, McQueen, Westwood, and others utilized fetish-inspired silhouettes in their collections throughout this last quarter-century, introducing the “fetish-look” to larger and larger audiences.

That Perugia, a half a century earlier, would find inspiration for his designs for Mistinguett, one of the most sexualized performers of her time, in the fetish design vocabulary is no coincidence.  Mistinguett’s overt sexuality was a force that drew audiences to her, and Perugia showed an astute understanding of his client and muse in designing shoes that reflect and emphasize this force.  I believe it is this that above all else distinguishes Perugia as one of the 20th century’s most remarkable footwear designers.