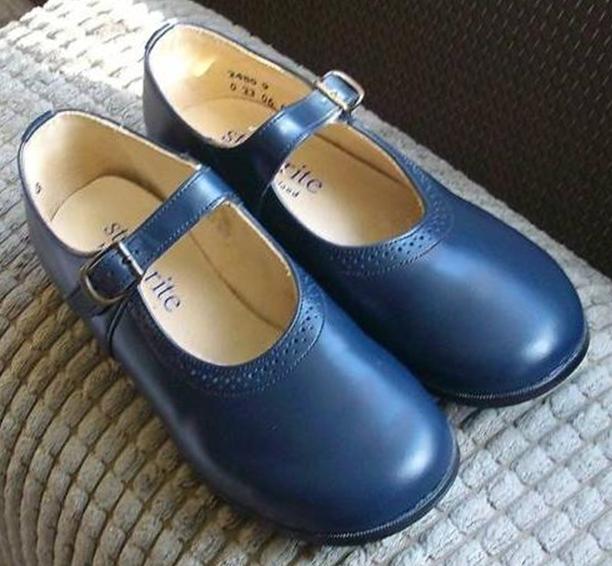 Mary Janes are characterized as a closed-toe, low-cut shoe with one strap across the instep. They’re traditionally made out of patent leather or black leather with a button or buckle fastening the strap. The toe is traditionally broad and rounded, and the shoe features a low heel with thin outsoles. (1)

Mary Jane shoes rose in popularity during the early 20th century when they were originally worn by children of both sexes. The shoes get their name from the fictitious character Mary Jane, invented by the Brown Shoe Company in the early 20th century. The character was created to complement their boy’s brand, Buster Brown. It wasn’t until the 1930’s that Mary Janes became associated with young girls as boys began to sport oxfords instead.

Boys typically wore Mary Jane shoes with knee high socks while girls wore them with socks or pantyhose. However, both sexes would occasionally wear them alone. During the 1940s, Mary Jane shoes swept across Europe and America in popularity. As they grew in popularity, the shoes became a popular shoe choice for women of all ages.

Today, Mary Jane shoes adhere to their original construction with their iconic single strap around the instep. You can still find modern Mary Jane shoes reserved for school uniforms and semi-formal events. There is even a variety of Orthopedic Mary Janes that are ideal for every day wear for both children and adults. Throughout their history, Mary Jane shoes remain to be a classic staple of childhood, especially when it comes to little girls. (2)

What Are Mary Jane Shoes Made of?

Original Mary Jane shoes were made out of black leather or patent leather that gave them their glossy look. The uppers are typically clean, but floral perforations may be made to the seam or strap for an added pop.

Today, varying Mary Jane styles can be made out of cotton, suede, or other durable materials. The outsole can be made from a smooth leather, metal if used for tap dancing, or rubber for greater traction control.

In their origin, Mary Jane shoes were specifically reserved for children and grew to be a staple shoe among young girls. Today, Mary Jane shoes continue to be targeted toward young girls, but have grown to find their place in women’s fashion as well. Adult Mary Jane shoes typically have a higher heel that can range anywhere from 1 inch to 2 and 1/2 inches. The heel can also be rather “chunky”, measuring out to 1-2 inches in width and length.

The iconic Shirly Temple helped place Mary Jane shoes on the map with her iconic tap dancing Mary Janes. Temple’s Mary Jane tap shoes can be seen on display in the Academy Museum in Los Angeles.

In the early 2000s, Mary Jane shoes for women exploded in popularity across Europe, specifically the United Kingdom. It wasn’t long before the trend trickled over to North America. The Mary Janes of the 2000s featured an exaggerated heel, and they came in a variety of colors and material options. Their presence in the Lolita Fashion Underground and punk scene propelled their popularity.