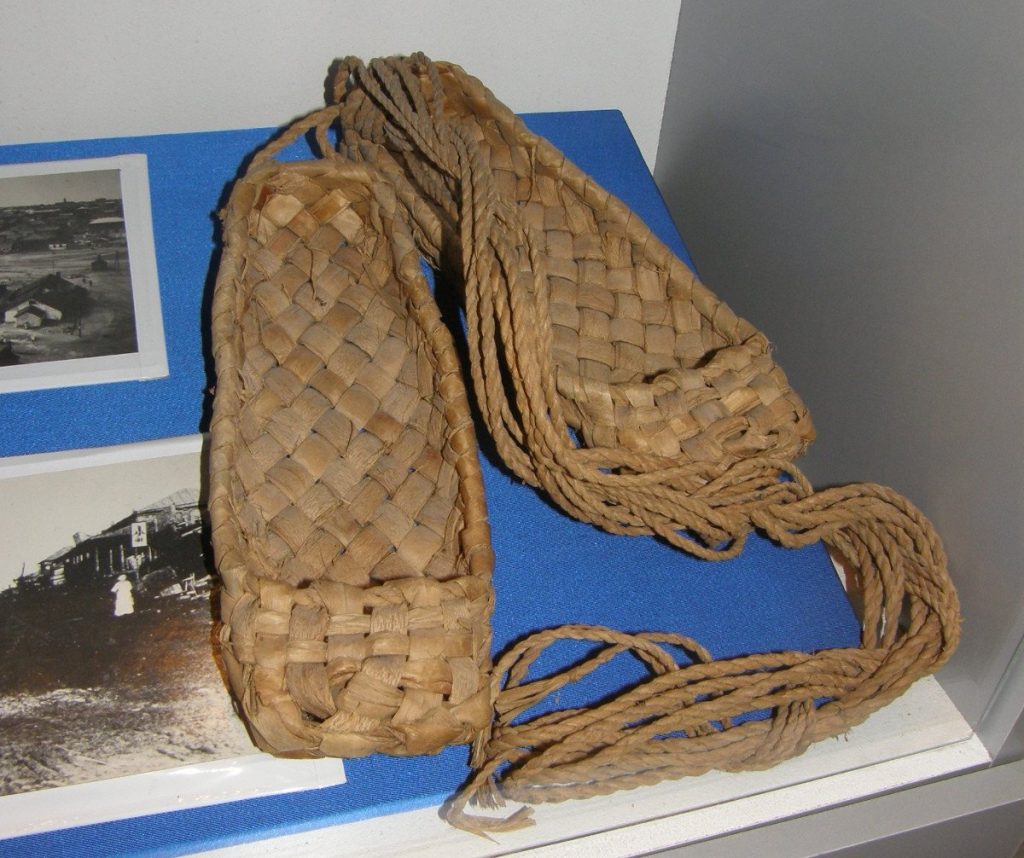 Bast shoes are a type of shoe made from thick, basket-woven bast, a fiber pulled from the bark of a birch tree. The shoe’s soles and uppers are woven together, and there are thick straps of braided bast attached to the heel that wrap around the ankle to secure the shoe to the foot. (1)

Bast shoes are a simple type of shoe that is similar to the espadrille shoes of Spain. Both rely on natural materials and have a slip-on construction, though bast shoes are a lot more primitive in design and structure.

Bast shoes are hand made and were the traditional footwear of regions in Northern Europe, with each region taking their own spin on the shoes. The primary difference was the way they were woven. Some shoes featured thicker soles because of the climate, while others featured denser weaving for better insulation.

More often than not, bast shoes also came with straps that wrapped around your leg and ankle for additional support.

Bast shoes were commonly worn by Belarussians, Russian, Balts, and Finnic people and were worn mainly by people in lower-class families. Because they are easy to create and require only a tree’s bark to make, families who lived in the forest and rural regions wore them. In Russia, the shoes are known as “lapti”. This word has become a sort of derogatory term used to reference the people who wore them. (2)

Traditionally, the men of the family would weave a pair of bast shoes for every family member. Although a pair did not have a long life after it was made, bast shoes did provide ample protection from Northern Europe’s wooded environment.

For the most part, bast shoes were worn by farmers and outdoorsmen. Nobility and individuals who lived in urban areas did not wear the shoes as they were a symbol of the poor and uneducated.

Bast shoes are simple in their design and construction, and they are typically made out of bast fiber. Bast is a strong and durable plant fiber peeled from the inner bark of a birch tree. Sometimes, the bark of lime, willow, larch, and juniper trees was used to construct the shoe.

Before the bark was used, it needed to be prepped. It was soaked for an extended period of time, then flattened out and straightened using a press. The shoes were cheap and easy to make because of the material used.

Because the tree bark underwent minimal processing before it was used to craft the shoe, bast shoes were known to be protective but not durable. Bast shoes, on average, would only last a couple of weeks before a new pair needed to be made.

Sometimes, the soles of bast shoes were reinforced by three or four layers of bark. For those who could afford it, rubber was added to the bottom of the soles for extra protection and longevity.

Depending on the region and climate, some bast shoes were reinforced with leftover furs and leathers to provide more insulation and foot coverage.

The art of crafting bast shoes has all but died out in the 21 century. The necessity of making bast shoes was not passed on to current generations as shoes became more affordable. Today you will generally find bast shoes on display in artisan stores and select shoe museums.