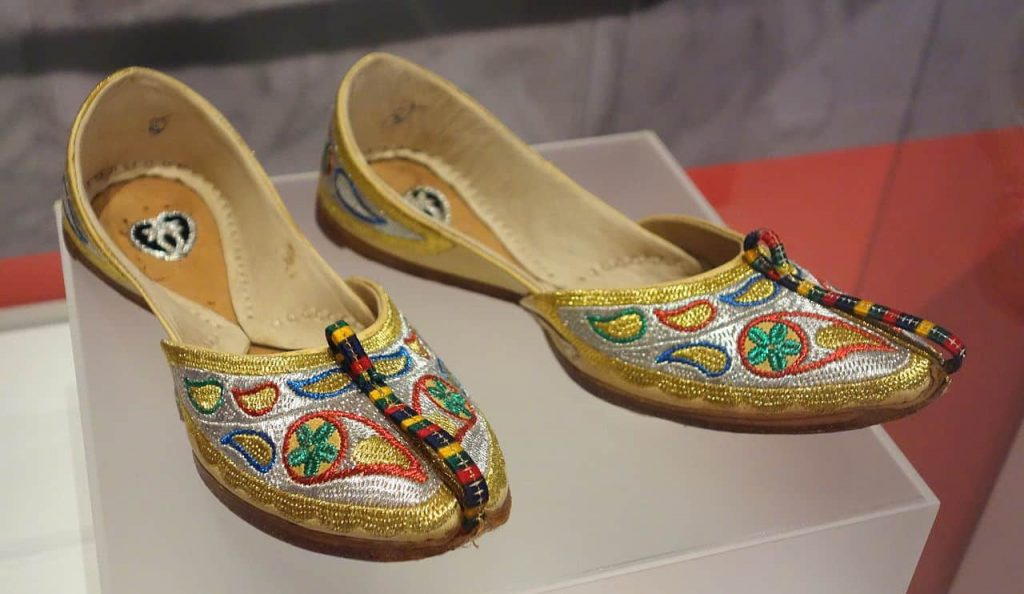 The Jutti shoe, also known as the Punjabi Jutti, is a style of footwear in Northern India and the regions surrounding it. Generally jutti’s are made of leather, real gold or silver thread and embroidery, as a representation of Indian royalty dating back 400 years ago.

Jutti’s are identified by their flat sole that does not differentiate between the left or right foot, as well as a pointed toe. Oftentimes, the jutti is made from the hide of cows, buffalo or camels and are decorated with silk, cotton or gold embroidery. Many regions in India have specific features and names of the type of jutti they wear, such as the curled toe Salim Shahi which was named after a Mogul prince.

The jutti originated from a classic Indian shoe called the mojari, which was worn by the wealthiest individuals of the early 1600s. Juttis were first introduced in India by the Mughals and became extremely popular amongst the royals.

Juttis were generally worn by the wealthiest, highest class citizens in India. Overtime, Jutti’s became much more readily available to the public and are now worn all over India.

How are they made?

Jutti’s are a very tedious shoe to make and need several people to construct one pair. The “chamars” process the raw hide, “rangaars” color and dye the hydes and “mochis” assemble all the pieces, finalizing the product.

The process begins at a tannery where the raw hides are processed using a vegetable tanning method which will give the shoe its strong, wearable and water resistant qualities. The shoe is then given its coloring by the mixture of powder pigment and water. The processed leather is then cut into shapes that will soon be the jutti.

Jutti’s come in an array of styles and colors depending on the region you are in. The modern day jutti is used as an expression of Indian heritage and history. Although jutti’s are a traditional shoe, modern day flair can be added.

Tilla’s come from the town of Fazilka and embroidered with gold and silver thread, as well as paper checks cut out by check artists.

In the towns of Mukstar and Malaut, basic check designs are traced and embroidered with stencils, which are then pasted on the leather. This simpler process is done to meet the high demands these particular jutti’s have.

How Do You Take Care of Jutti’s?

Best Juti Center has a good resource for care and handling of juttis, but here’s a summary below:

Wrap each shoe in muslin cloth. This specific type of fabric is softer and breathable in comparison to other fabrics. It will not damage any embroidery your jutti might have.

Mustard oil should be used prior to your first use as it can help with the avoidance of blisters.

In the case of your jutti getting wet, dry them in the sun for the best results. Due to the fact that they are leather, drying them in a machine can cause damage.

Use a thin cloth or a small brush to clean your jutti. Using a toothbrush that has been dipped in mild soap and water could also work if done carefully. Jutti’s that have a lot of embroidery should be dry cleaned to avoid impairment.