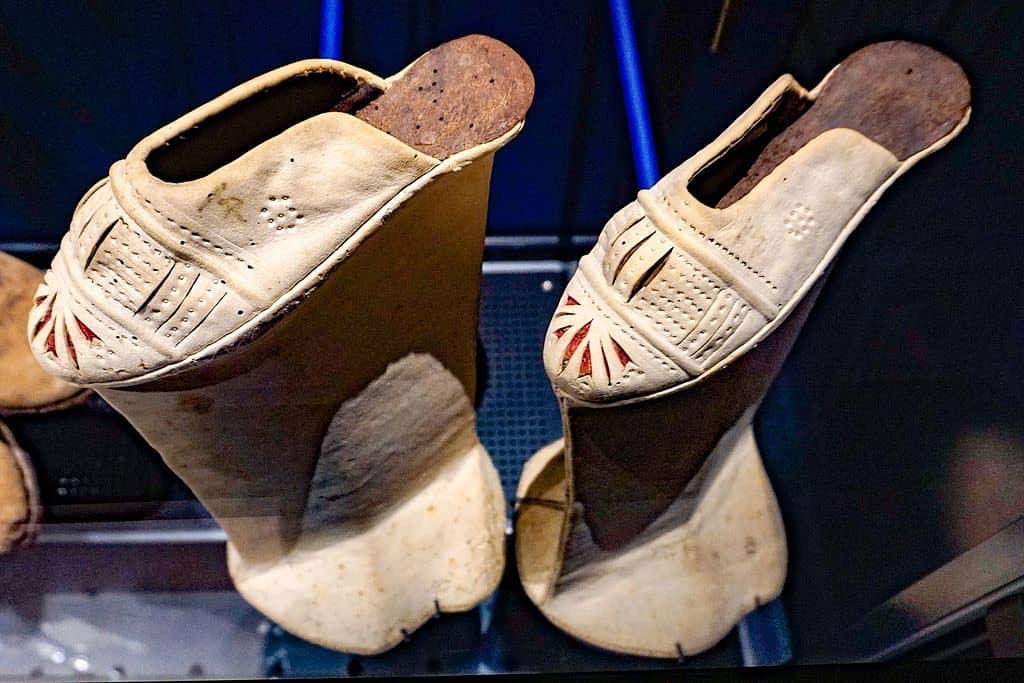 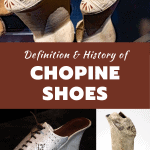 A chopine is a type of women’s high platform shoe popularized during the 15th, 16th, and 17th centuries. They’re characterized by a wooden or cork platform and can range from 2 to 20 inches in height. (1)

Elevated footwear dates back to ancient Greece, but Venician women popularized chopines during the Italian Renaissance. At the start of the 15th century, noblewomen wore chopines as a way to protect their dresses from getting muddy. Over time, these platform shoes became a status symbol among high society. (2)

From the ancient Greeks to the bathhouse platform shoes of the Islamic empire, elevated platform shoes have existed throughout history. It wasn’t until the 15th-century chopines made the transition from practical shoe to fashion and social statement.

Noblewomen and women from high-status families wore chopines as a way to protect their dresses from getting muddy and dirty at the hems. Though researcher and senior curator at the Bata Shoe Museum, Elizabeth Semelhack, argues that avoiding the mud played a minimal role in their popularity. Instead, the high platforms were a way for women to literally stand out in a crowd in terms of their wealth and status.

Because chopines were worn by nobility, it wasn’t out of the ordinary to see these stilted women accompanied by a servant on either side to help them walk. Especially since the higher the platform, the more wealth and status the wearer would assume.

Chopines also burst in popularity during the 15th century in Spain. Unlike Italy where textiles were a symbol of status, and dresses were made long and covered the shoes, Spanish dresses would usually stop right at the shoe letting the chopines be visible. Spanish chopines were made out of cork (resulting in a cork shortage in the area) and were often covered in metals, gems, and jewels.

Chopines in the 21st century

Luckily, for the sake of ankles everywhere, chopines faded from the mainstream soon after the Italian Renaissance ended. But that doesn’t mean these high platform shoes don’t still pop up on fashion runways.

Who better than Lady Gaga to breathe new life into high platform shoes? In 2011, Lady Gaga broke the internet with designer Noritaka Tatehana’s gravity-defying shoes that bear a resemblance to what could be the sister of the chopine.

Chopines remain one history’s most intriguing yet questionable fashion footwear staples. Then again, it’s not unusual for a fashion statement to come at a price — in this case, incredibly sore ankles. Would you sacrifice your balance in the name of beauty?